Do note that the mechanics and timing of events is a little different from using AppDomain's with .Net 4.6 to using the dotnet CLI. See the later topics in this page for a discussion of both.

To trigger Storyteller to recycle your system on demand, there's a command at the top right of the UI: 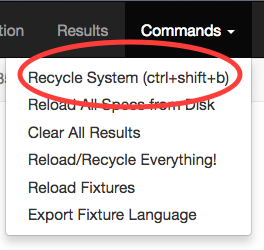 If you prefer keyboard centric workflows, you can use ctrl + shift + b to trigger the system recycling.

Recycle Status in the UI

To give users some indication of whether or not they're running specifications against the latest version of the local code, the Storyteller UI shows the time of the last system recycle in the status bar at the top right:

When the system was last recycled

To see more information about the running system, click on the "Recycled at..." indicator to see the system properties -- but this is much more important with the AppDomain mechanics.

Note! You do not have to worry about compiling your Storyteller project with the dotnet CLI because the dotnet run command does that for you.

If you are using the dotnet CLI mechanics (the default in Storyteller 4.0), Storyteller cannot today auto-detect changes to your code and trigger the recycle command for you. Not to worry though, because the mechanics are somewhat simpler just because of how the dotnet run command does compilations for you.

Note! When using the older AppDomain mechanics, you have to do the compilation of your Storyteller project yourself

If you are using Storyteller in its dotnet storyteller open --app-domain mode with .Net 4.6, the Storyteller UI watches for any changes to files with the extensions *.dll, *.exe, or *.config and automatically triggers a system recycle. In effect, what this means is that if you recompile your Storyteller specification project, the running instance of the Storyteller UI should quickly recycle the system. It's an imperfect world of course, so sometimes the file system watcher will miss the file change and you might still have to recycle the system manually.